Today we will discuss about “Al-Farabi Kazakh National University”.

If we talked about Top university higher education of Kazakhstan, and one of the Best option of Central Asia is Al-Farabi Kazakh National University .This university have celebrated the 86th anniversary in 2020. There was a huge event was organised by the University authorities .To make the program successful various activities were planned and some of the notable events were like QS Worldwide Conference, Silkroad Universities Network, V General Assembly, Workshop for University Social Responsibility Network and Global Youth Forum in last year.And the best part was researcher and academicians all across the world have participated in this event. 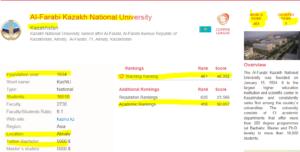 Ans: This University was established in year 1934.

Ans: This is located  in Almaty which was former capital of Kazakhstan.

Ans: Current ranking of this  University is 165 in QS world ranking.

Question : From where this University gets its name “Al-Farabi Kazakh National University ” ?

Ans: This  University ,gets its current name, from the 10th century Arabic philosopher Al-Farabi (also known as Alparabius) in 1991 following Kazakhstan’s declaration of independence from the crumbling Soviet Union, and in 2001 was classified as a national university.

There are more than 16 schools and 65 academic departments.As far as area is concerned this university is spread over 120 acre of land Kazgugrad campus in Almaty, which is dominated by a multi-storey building which accommodates the university administration along with the faculties of medicine,physics,history, economics, law, chemistry ,philosophy and journalism.

AFKNU  has pursued world wide connections strongly, enabling agreements with more than 310 Institutes worldwide.Some of the most update is agreement with Madrid Complutense and the American University of Ras al Khaimah .Some of the people indulged  in the Erasmus REKT library project and the New Silk Road student programme.

Alumni associations fund scholarships to hundreds of students each year. In addition to this university runs a free hospitals for all needy patient.

If we talked about alumni of AFKNU  have produced lots of  leading researcher, academicians of Kazakhstan, in addition to this large number of politician,ministers, governors, good managers, members of Parliament, CEOs of National organisation and in sports Olympic Champions as well.

Al Farabi Kazakh National University  offers 115 bachelor degree programs at 16 faculties, which are among the leaders in the national subject ranking in Kazakhstan.

The university is associated with lots of reputed organizations:

Al-Farabi Kazakh National University is the first higher educational institution in Central Asia, which ranked 165 among more than 800 universities in the QS Graduate Employability Rankings. This ranking is based on assessment of a university reputation among employers, of professional achievements of its graduates, of partnerships with employers, of organization of interaction between employers and students, and of its graduate employment rate.

In 2015 the university established a new faculty – Faculty of Medicine – Higher School of Public health. In 2018, because of challenges of digitization two departments of the Faculty of Mechanics and Mathematics were transformed into the separate Faculty of Information Technologies.

Based on the results of an independent assessment conducted by QS in 2018, KazNU became the first University in Kazakhstan and the only one in the Central Asian region that is awarded «Four Stars» of Excellence in «QS Stars Development Road map international rating».

Rating from 0 to 5 stars of QS is awarded to HEI’s based on the results of a comprehensive analysis of more than 50 indicators that reflect a wide range of activities of the University and its compliance with high international standards.

QS Excellence rating of «Four Stars» means that KazNU has a high international reputation and demonstrates leadership positions in the global scientific and educational space. The Stars of Excellence demonstrate the strengths of the HEI and help orient partners and students to choose University.

Thus, in a number of indicators, KazNU is awarded the maximum rating of «Five Stars»: educational services, internationalization, facilities and inclusiveness.

It should be noted that only five universities in the CIS countries have received Four Stars of QS –Al-Farabi KazNU and four Universities from Russia.

Al-Farabi Kazakh National university became the first high education institute from Central Asia which took 251 place among 500 universities in QS Employability Ranking. The Ranking was estimated based on the several criteria such as employer reputation, alumni outcomes and partnerships with employers. This high result confirms that KazNU has close connections with employers and most of its graduates work in the best organizations of country as well as abroad.

The leading positions in QS Employability ranking were taken by the following institutions; Stanford University, University of California, Harvard University, Australian university of Sydney and Massachusetts Institute of Technology.

High performance of  KazNU in QS Employability ranking demonstrates that the university was always “the producer of big minds” in labor market. Now many graduates of university work for development of the country, both in state and in private enterprises. The university is always proud of the outstanding graduates.

The current prime minister – the minister of Kazakhstan B.A. Sagintayev, the Attorney-General of RK Zh.K. Asanov, the chairman of the Supreme Court of RK K.A. Mami, the akim of the city of Astana A.O. Isekeshev, the famous poet, the writer and the diplomat O.O. Suleymenov are graduates of Al-Farabi Kazakh National university. Nowadays the university continues the best traditions on training of qualitative experts in many fields of science.

For successful preparation of highly demanded specialists in labor market, the university has created educational process in close cooperation with employers. More than 5000 employers give an opportunity for students to make an internship in their companies, and each faculty has a council of employers participating in development of educational programs structure and contents.

The university annually organizes a Job Fair which brings more than 2000 employers offering an opportunity to future graduates to find decent work. During the international accreditation of all educational programs, experts of the European higher education institutions and employers of Europe appreciatiated the level of interaction between KazNU and employers.

One of  strategic goals of KazNU is train competitive graduates and develop the close cooperation with employers. For example, world leading companies  such as HP, KOICA MINOLTA, CISCO, FUJITSU, SAMSUNG are created educational and research centers at al-Farabi KazNU.

Hope this article “MBBS Admission Kazakhstan 2020” will be helpful for all those medical aspirants who are looking for good medical colleges in Low Budget.