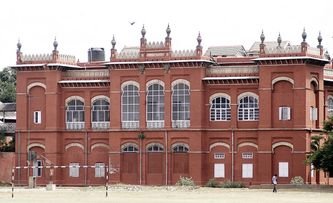 Madras Medical College & Hospital is one of the top medical colleges in India.

It was started on 16th November 1664 as a small Hospital to treat the sick soldiers of the East India Company.

It is the brainchild of  Sir Edward Winter who was the agent of the company that materialized in the first British Hospital at Madras.

In the beginning, the Hospital was housed at the Fort St. George and it took another  25 years to convert in a formal medical facility. Governor Sir. Elihu Yale played an important role in the development of the Hospital and gave it new premises within the Fort in 1690.

The Hospital moved out of the Fort after the Anglo-French War and it took 20 long years before it could settle in the present permanent place in 1772.
By the year 1772, the Hospital was training Europeans, Eurasians, and natives in allopathic methods of diagnosis and treatment and methods of preparing medicines.
This trained personnel were posted to various dispensaries in the district headquarters of the then Madras Presidency to assist the qualified doctors.
By 1820 the institution had the recognition as the model hospital of the East India Company. So in 1827, Dr. D.Mortimar was appointed as the Superintendent of the Hospital.

A private medical hall run by Dr. Mortimar was regularized as a medical school and it was opened by Sir Fredrick Adams, the then Governor of Madras on 2nd February 1835.

The Governor promulgated an order to make the school a state-sponsored one and attached it to the General Hospital.
In 1842 the Hospital opened its doors to local peoples of India.

In the next two decades, the teaching staff had increased, the duration of the course extended and the curriculum was made comprehensive.

Senior courses spanning 5 years were started and private people were also admitted for the first time in the institution.

In the early part of 1850, the school council submitted proposals to the government to accord the status of a College. The Government granted this request and from 1st October 1850, it became Madras Medical College.
The first batch of students graduated in 1852 and was granted the Diploma of Graduate of the Madras
Medical College.

In 1857, it get affiliation from the University of Madras.

After the affiliation in 1857, the College moved to be a center of excellence providing training in all the specialties in the field of medicine and surgery. Today it is one of the top institutions in the country with undergraduate, postgraduate and super-specialty courses.

The Courses offered by the Madras Medical College are affiliated from 1988 to the “The Tamil Nadu Dr. MGR Medical University”.

This College has nine affiliated institutions with hospitals, each one of them recognized for excellence in Health care services.

This College stands with pride for having produced Doyens in the field of Medicine and forgets not that you have become a part of this great institution now.